The Tree of Everlasting Knowledge by Christine Nolfi

The Fagan family are having their mansion renovated, to build a new south wing for their pregnant daughter and husband to live in. The Fagan family run a successful orchid business; they shipped produce throughout the U.S employing several hundred people.  The company had made all the family millionaires.

Their son Troy had left the family business to work in construction and he was working on the renovation for his family. Troy is feeling anxious about the renovations due to the part of the house that they were renovating was his teenage brother, Jason’s room. Jason had been murdered fifteen years ago.

Ourania D’Andre runs her own electrical business; she has got a job working on the Fagan’s renovation. She sees the job with the Fagan’s as the most important of her career and she is hoping it will lead to more work. But she feels her job may be in jeopardy because she and Troy share a past. So she wants to work really hard and prove that she can do the job. She knows that Troy is just looking for an excuse to fire her.

When Ourania’s mum, a social worker who manages family services which champions children’s causes before state judges, needs an emergency foster home for two children while their father is in therapy. She asks Ourania to take them in. Ourania at first declines because she knows taking on the children would complicate her job. But when she meets the children she decides to take them. She has to struggle with working and looking after two small children.

While renovating Jason’s room Ourania finds a box at the back of Jason’s closet. She hangs on to the box thinking it might have the usually things in it that a teenager does not want their parents to know about, but after opening it she finds letters that could change Troy’s life forever.

Will she choose to pass the letters on to Troy?

And just what is the power of the mysterious Great Oak tree. What secrets does it keep?

This is the brand new novel from Christine Nolfi; The Tree of Everlasting Knowledge is an emotionally charged novel that is beautifully written by Christine Nolfi. I do like a book that has you hooked into the story from page one. I found the story very moving and touching. The conclusion to the story is a very satisfying outcome.

To but this book from Amazon UK, click the following link: http://www.amazon.co.uk/dp/B007IO78QK

To but this book from Amazon US, click the following link: http://amzn.com/B007IO78QK

For more information on books by Christine Nolfi visit her website http://christinenolfibooks.blogspot.com/ 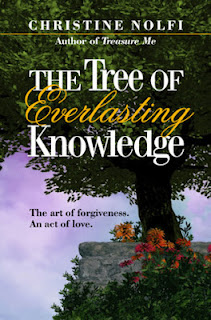