A Clean Sweep by Audrey Davis

Relationships are at the heart of this story and each of the characters are at a crossroads of change in their lives. Each chapter we learn a little more of each character individually and slowly we learn how they are all connected.

The story is very fast paced with lively words from page one that are so full of spark and energy they explode off the page with enthusiasm, sweeping the reader along in their energetic almost hyperactive way, that is thoroughly entertaining. 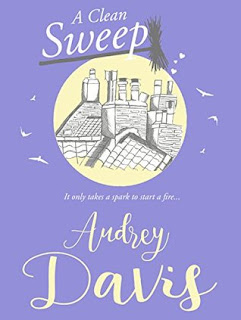 My inspiration for The Betrayal, Book 6 in The Guernsey Novels.

The Betrayal’, like the 5th book, ‘Echoes of Time’, is dual-time, with chapters set during WWII and the present day. The events I describe during the Occupation are based on fact, but the characters are fictional. 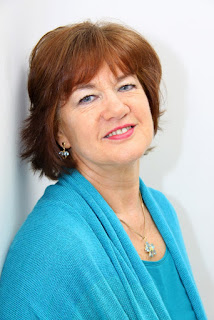 The first inspiration for this story was the deportation of Jews from Guernsey by the Germans during WWII. There was only a handful on the island and not long after the Occupation in 1940, they were singled out for more onerous treatment than other islanders. Eventually they had businesses and property confiscated before, in 1942, being sent to concentration camps. None returned. It is now considered a shameful blot on the island’s history, but the then local government was powerless to resist their German ‘masters’.
On a brighter note, the second inspiration was the artist Renoir. He spent the summer of 1883 in Guernsey painting numerous versions of a particular bay, Muelin Huet, amongst others. At least one of these paintings is in a museum. I joined these two known events to produce ‘The Betrayal’.
Leo Bichard is a prominent businessman whose French grandmother was a Jew, although both his parents were Christians. His family have never mentioned their ancestry but, unfortunately for Leo, someone tells the Germans, and he is deported with other Jews to concentration camps and does not return.
A matter of days before the Germans arrive, Leo sends his beloved wife, Teresa, and child to England and he stays to defend his property and stand alongside his fellow islanders. However, the Germans soon impose severe restrictions on the population and Leo is forced to close his business and months later his house is taken over by soldiers and he has no choice but to live with his housekeeper in her small cottage. When Teresa returns after the war, she finds her home wrecked and the family’s valuables, including an extensive art collection, missing. One of those was a treasured family painting by Renoir. Learning she is a widow, she returns heartbroken to live with her family in England.
In 2010 Nigel and his twin Fiona, locals who have lived in London since university, return to Guernsey and buy a long-established antiques shop. A year later, during a refit, they find a hidden stash of paintings, including what appears to be a Renoir. Days later, Fiona finds Nigel dead, an apparent suicide. Refusing to accept the verdict, a distraught Fiona employs a detective to help her discover the truth.
Searching for the true owner of the painting brings Fiona close to someone who helps to heal her broken heart. But there are important questions to answer before she can lay her brother's ghost to rest —
Who betrayed Leo? Who knew about the stolen Renoir? And are they prepared to kill – again?
http:www.anneallen.co.uk
http:/myBook.to/TheBetrayal
FB. https://www.facebook.com/Anne-Allen-Author-176883759173475/ 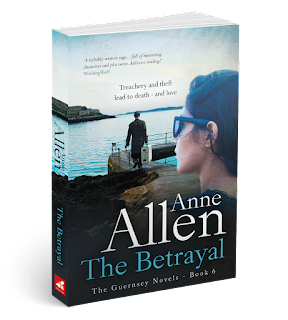 Anne Allen lives in Devon, by her beloved sea. She has three children and her daughter and two grandchildren live nearby. Her restless spirit has meant a number of moves which included Spain for a couple of years. The longest stay was in Guernsey for nearly fourteen years after falling in love with the island and the people. She contrived to leave one son behind to ensure a valid reason for frequent returns.
By profession Anne was a psychotherapist but long had the itch to write. Now a full-time writer, she has written The Guernsey Novels, the sixth having been published on 20th October 2017.

Life can be funny at times. I don't mean funny ha, ha, just funny at times. We never know what, or where it may take us, or the time it may take away. I find myself with not much free time of late. I like to look after my clients and be fully involved to take them and their books to the next level. I like to discover fresh and new talent to let loose on the writing world and this blog is one of the ways in which I find just what I am looking for.

Lately I have been spending time with a very special person and have been homing in on their talent and watching the way the world sees them in a different light. Given the opportunity they have a talent so great, they can go on to achieve nothing but good things. Unfortunately like a lot of us who work in media they have had their share of knock backs. But we all know from  knock backs there can be come backs and I know in the future this will be 'one to watch' They will go on to great things.

My little cottage in beautiful North Yorkshire is calling to me, my desk all set to prepare for my new ideas, to flow and turn into presentable words. My editor knowing I will be keeping them very busy over the next few months and knowing I have the backing of my wonderful co-writing team.

So off I go into the unknown. Sadly leaving me no time for reviews over the next few months. New projects await. Pencils need sharpening and in a world with no predictive text holding me back, a story will surface with new names and places and faces. Covering and completing the pages.

See you all soon

Christmas at Bay Tree Cottage by Linn B. Halton

A cosy Christmas read, built around the renovation of a cottage. A cottage where once hope and dreams for the future were tragically put on hold, when life did take a whole different direction for the cottage owner Elana and her young daughter. When handsome and young Luke steps in to help with the work, foundations are built on to form feelings that can no longer be ignored and with a little help from a Christmas spirit, can hearts also be restored to let a little love in?

I loved this book from beginning to end. Pure escapism and if I had the chance I would have read it all in the one sitting. Just simply one of those perfect reads that you can get so involved with the characters that you can get completely lost in the book and forget about everything for a short while and take a break out of your own life and become captivated in someone else’s. Leaves you feeling good.

Christmas at Bay Tree cottage is out on the 27th October pre-order now on Amazon.co.uk http://amzn.eu/dWAVIAQ