Orange Petals in a Storm by Niamh Clune

Skyla McFee is an eleven year old girl. Since Skyla has been six she has had the misfortune of living with the Roache family. When her mother Ariana had met and moved in with the cold and cruel Gene and his equally cold and cruel children and mother Dorothy, after Gene persuaded Ariana to sell her house, the home Skyla had loved.

On her death bed Ariana is tricked by Gene and Dorothy into signing a blank piece of paper instead of the will which she thinks she is signing to have Skyla cared for by her sister Rocks. But now the will reads to make Skyla the sole beneficiary of Adriana’s estate and Gene the executor. They plan for Gene to take all the money.

After the death of her mother Skyla is badly neglected and abused by Gene and Dorothy. She is often locked in the cellar and is also been bullied at school. Skyla tries to stay invisible and in the shadows out of sight. She also finds that she can escape to her own imaginary world a safe and magical world where no one can hurt her and she feels safe.

After she is locked in the cellar, Skyla manages to escape and runs back to her old house. She is found barely alive by a kind man called Dr Timothy Taylor who calls an ambulance and gets her to the hospital and becomes concerned about her welfare.

Could this be a Skyla’s chance to escape her cruel world?

Will the vicious and manipulating Gene and Dorothy manage to convince social services and doctors that Skyla acted out of grief for her mother and frighten Skyla enough for her not to tell the truth so they are not found out and have Skyla return back to live with them?

And what will happen when someone contests the will Gene and Dorothy wrote, is someone on to their scheme?

Orange Petals in a Storm is a moving and compelling tale about the plight of a child in an awful situation. Living in a family without love, constantly put down and badly neglected by a man who used her mother for his own financial benefit. I thought this book was really well written and I liked the way when Skyla drifts into her inner world it gives the reader the feeling that you have just gone through a door, that takes you out of the story and into another adventure, before taking you back to the story and it keeps the reader guessing to just how much of what Skyla is experiencing is true or fantasy. I will look forward to reading more of Niamh Clune’s work.

To buy this book from Amazon UK, click the following link:  http://www.amazon.co.uk/dp/B0055DVQEG


To buy this book from Amazon US, click the following link: http://amzn.com/B0055DVQEG 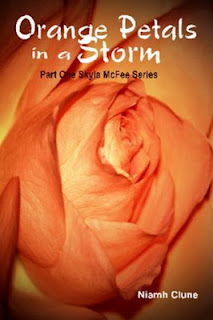