Excess All Areas by Mandy Baggot

Freya Johnson should be celebrating her thirtieth birthday, having a nice romantic meal with her boyfriend Russell in a nice restaurant, but instead she has flown to the pretty village of Kassiopi in northern Corfu to be with her best friend Emma. Freya is upset at overhearing her boyfriend Russell putting her down about her weight when asking the barman if he had seen Freya arrive at the restaurant. Russell had not known that Freya heard his unflattering comments and after hearing them she just fled and got in a taxi to the airport and now was in the pretty village of Kassiopi. Emma lived in the village after falling in love with a local boy and had decided to stay. Emma is the closest friend that Freya has ever had and a good confidante. The only person she can turn to as she does not see or talk to her family. Freya is also looking to have a nice peaceful break, a chance to reflect while she decides what to do and the island is the perfect place to do this.

Oscar winning Hollywood actor Nicholas Kaden, one of the most famous men on the planet is filming his latest movie on the island. In less than twenty four hours since Freya had arrived on the island, Nicholas Kaden and his entourage manage to annoy and inconvenience, Freya by taking over the island. When Freya finds out that they have taken over her favourite table in a restaurant, which had been booked for her to have a belated birthday celebration, unimpressed by Nicholas Kaden’s celebrity status she marches up to Kaden and gets cross, telling him and his entourage exactly what she thinks. Nicholas Kaden asks them to join his party for dinner, Freya is reluctant and is determined not to, but Emma jumps at the chance of dining and spending time with a film star so she agrees. Freya has formed an opinion on Nicholas Kaden that he is a stuck up, spoilt, arrogant actor with too much money and little concern for anyone but himself and when she overhears two male members of Nicholas entourage putting her down about her weight and saying they have placed a bet with Nicholas to if he beds her when he takes her out on a date. Still angry about what happened with Russell she decides to say yes to when Nicholas asks her out, so that she can take out revenge on ‘Mr Hollywood’  for daring to make her the subject of a bet.

But when Nicholas is charming on their date will she still go ahead with her plan for revenge?

What about Russell is he now a part of her past and is she ready to move forward and leave the past behind?

This is another enjoyable read from Mandy Baggot. I read this book in one sitting. Freya is a good strong leading character in this beautiful written story set in a picturesque part of Greece. What I like about Mandy’s main characters in this book is that they have a lot of depth and background that make the characters and the storyline far more interesting and impossible for you to predict how the storyline will come to its conclusion.

I really recommend reading any if not all of Mandy Baggot’s books.

For information about the author visit their website http://mandybaggot.webs.com/ 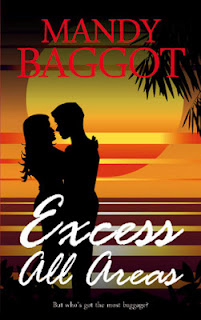