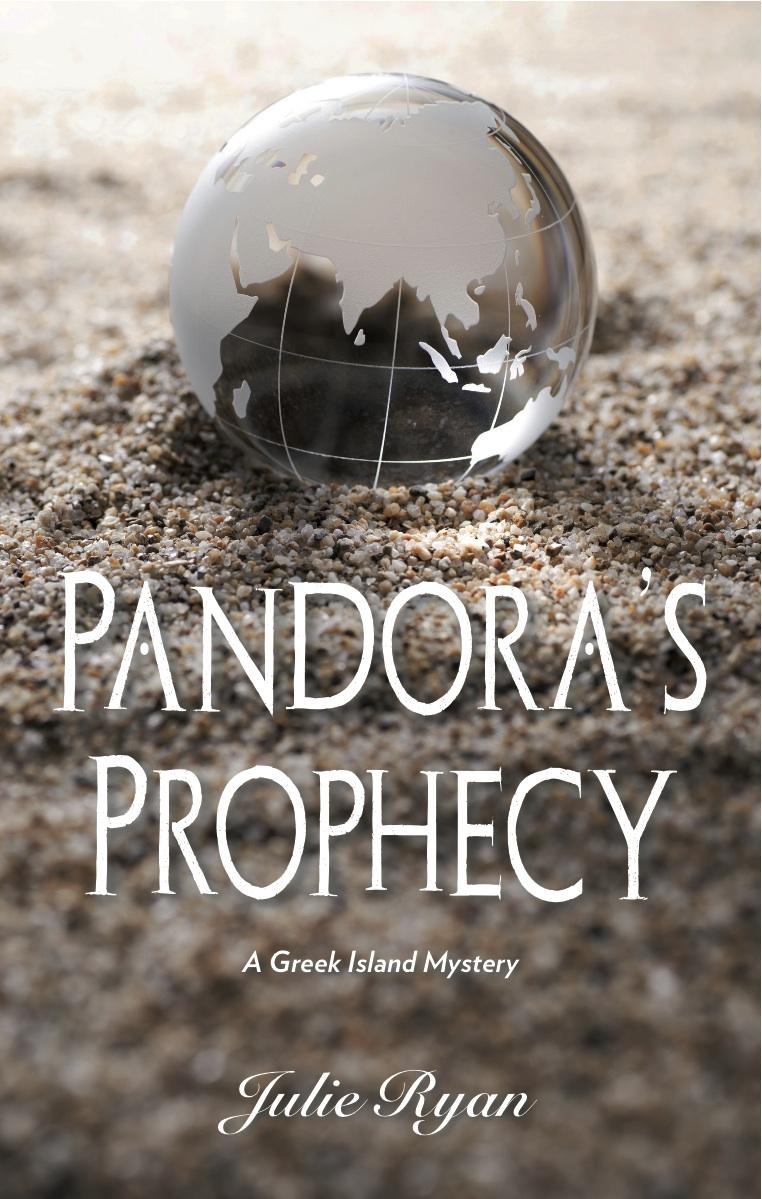 ‘Pandora’s Prophecy’ is the third in the Greek Island mystery series but can be read as a standalone, although some characters from the previous books do make an appearance.
Lisa and Mark are going through a rough patch, Vicky is seventeen and has just discovered that the man she thought was her father really isn’t, Ruth is getting over her husband’s betrayal after nearly twenty-five years of marriage. On the surface they have nothing in common except that they are all staying in the same hotel on a Greek Island. As they each come into contact with the mysterious Pandora, their lives will change forever. Bodies begin to pile up as a serial killer is on the loose who might just be targeting the hotel. The Island’s Police Chief, Christos Pavlides, tries to solve the puzzle but he has problems of his own to resolve. It seems that the local celebrity author is the one who holds the key. 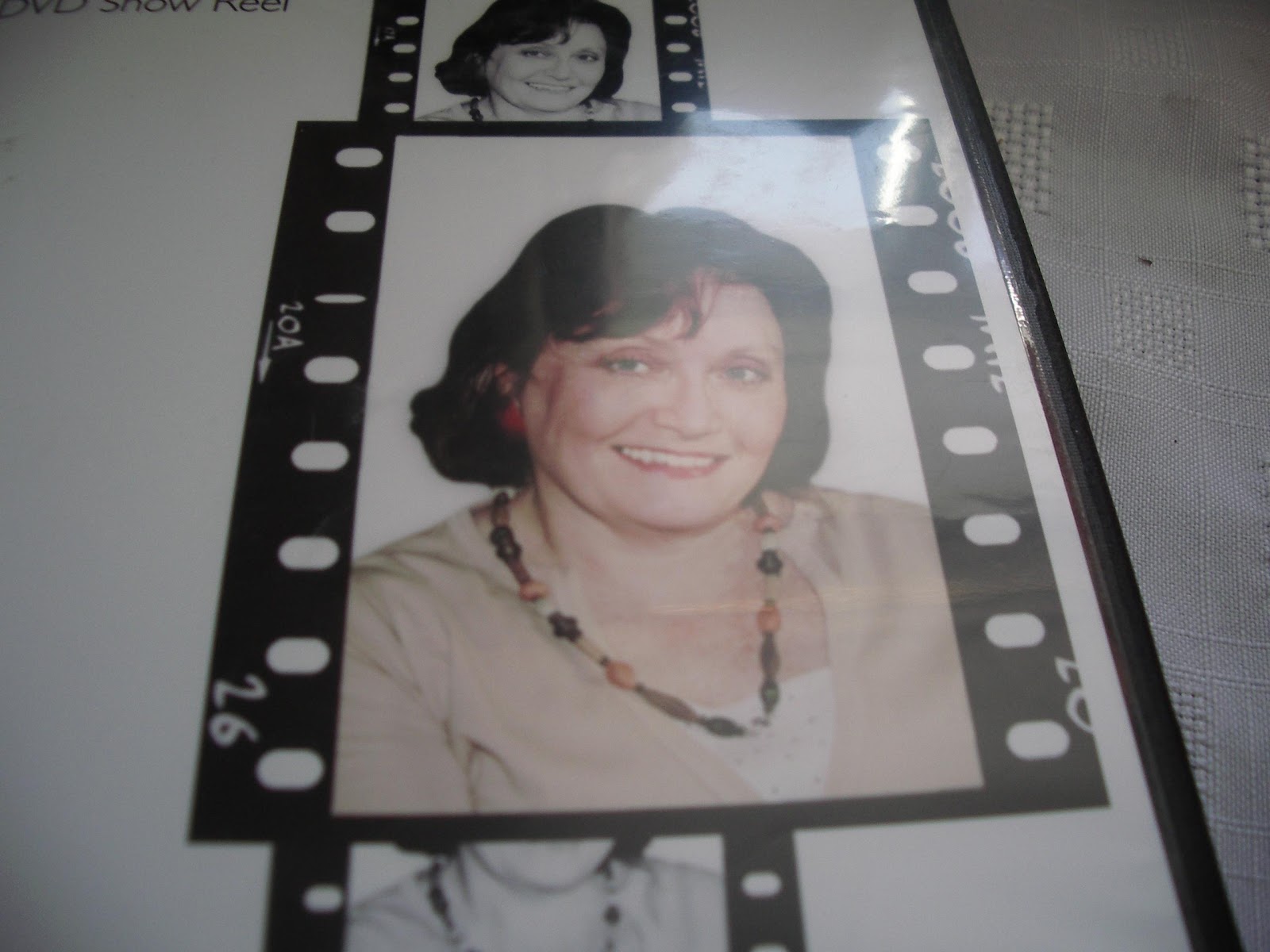 Julie Ryan was born and brought up in a mining village near Barnsley in South Yorkshire. She graduated with a BA (hons) in French Language and Literature from Hull University. Since then she has lived and worked as a Teacher of English as a Foreign Language in France, Greece, Poland and Thailand. She now lives in rural Gloucestershire with her husband, son and two cats, a rescue cat and a dippy cat with half a tail.  She is so passionate about books that her collection is now threatening to outgrow her house, much to her husband’s annoyance, as she can’t bear to get rid of any! They have been attempting to renovate their home for the last ten years.
She is the author of three novels set in Greece, “Jenna’s Journey”, “Sophia’s Secret” and ‘Pandora’s Prophecy.” She considers Greece to be her spiritual home and visits as often as she can. This series was inspired by her desire to return to Crete although there is a strong pull to revisit the Cyclades too.

Congratulations to author and friend Carol E. Wyer, the winner of The People's Book Prize for Non-fiction 2015 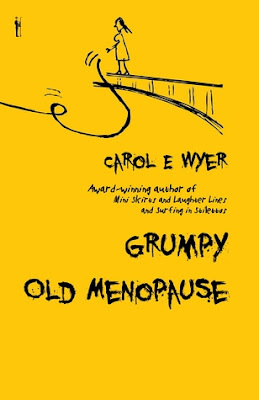 To buy from Amazon, click here
Posted by Nikki at 22:12 No comments:

Back Behind Enemy Lines by Chris Bridge

The story starts in Normandy in 1944. Anna is about to begin an adventure and war mission for the resistance that would change her life forever. Working undercover and given a new identity to spy and pass on information, Anna had already been pushed to breaking point by a dreadful loss in the war. When things are about to take an even more tragic turn.

In the modern day and sixty years later, Anna is left broken by her extreme experiences in the war. She had married and had children but found herself isolated from them and unable to connect. They want to put her in a home and she feels they are conspiring against her. Reaching out she befriends a couple of young students and through their help she is strong enough to go back and revisit her past and face her demons.

A very haunting and moving story, there is an atmosphere which builds up so strong in the way this story is told, that surrounds the reader with the sadness and heartache that the leading character is experiencing. The reader feels Anna's pain and regret and the heavy burden she has carried around with her throughout the years and her need for closure. 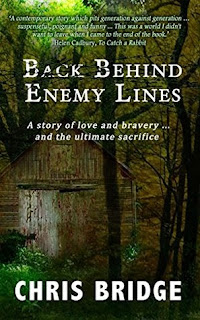 Grumpies on Board by Carol E. Wyer

This is an A-Z guide of different and sometimes unusual activities and places to visit on holiday. With over three hundred different ideas to inspire you to get up out of that armchair and get out and see what the world has to offer.
The book is written in a tongue-in-cheek and highly humorous way. Author Carol E. Wyer takes you on an amazing journey all over the world. The book has been really well researched and facts are mixed with jokes and wit that will have you laughing out loud.
Although this book is really good fun, the tips and advice in it are really good. You do learn a lot from the informative information given in an explosive expression of witty words. There is a good variety of choice to suit all. You just do not know what to expect next from alternate destinations to extreme sports and leisure activities and so much more. Not the stereotypical holiday guide book for people getting older…. More for the young at heart. 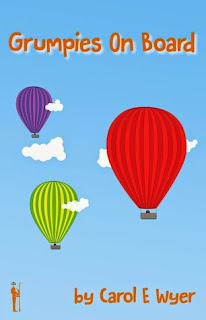 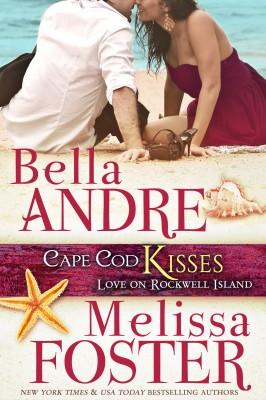 CAPE COD KISSESLove on Rockwell Island, Book One
When Quinn Rockwell left Rockwell Island a decade ago to build a shipping empire, he never thought he’d return to live on Cape Cod Bay—that is, until his grandfather summons Quinn and his four siblings to take over the prestigious Rockwell Resort. Quinn is already working fifteen-hour days, and the last thing he has time for is his grandfather’s demands. But on his first night back, when Quinn finds a gorgeous and carefree woman skinny-dipping in his favorite cove, he’s tempted to ignore his work for a while…and focus on her instead.
As a free spirit who follows her heart and her dreams, Shelley Walters is not the kind of girl to wait around for Mr. Right, so she heads to Rockwell Island for the honeymoon of her dreams—a solo honeymoon. Ready for a week of sun and fun, she never expected to meet a man like Quinn Rockwell.
Wealthy and intensely driven, Quinn is everything Shelley swore she didn’t want. Refreshingly spontaneous and a true romantic, Shelley is everything Quinn never knew he needed. Drawn together despite their differences, during a week of sizzling-hot passion and deep conversations, they fall head over heels for each other. But when their perfect week on the island is over, will their love survive in the real world?
BUY LINKS
Barnes & Noble
iBooks
Kobo
Google Play
Amazon.com
Amazon UK 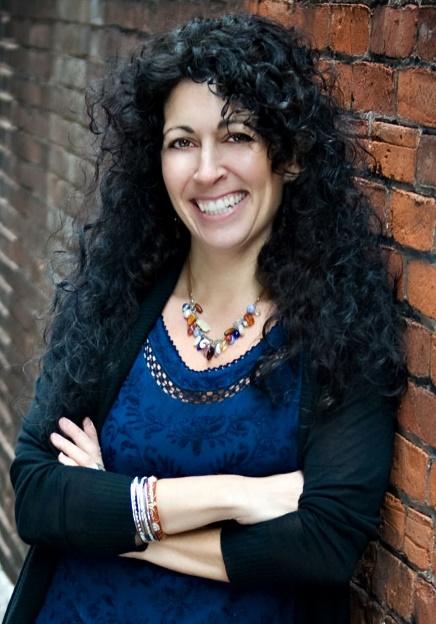 Melissa Foster is a New York Times & USA Today bestselling and award-winning author. She writes contemporary romance, new adult, contemporary women’s fiction, suspense, and historical fiction with emotionally compelling characters that stay with you long after you turn the last page. Her books have been recommended by USA Today’s book blog, Hagerstown Magazine, The Patriot, and several other print venues. She is the founder of the  World Literary Café and Fostering Success. When she’s not writing, Melissa helps authors navigate the publishing industry through her author training programs on  Fostering Success. Melissa has been published in Calgary’s Child Magazine, the Huffington Post, and Women Business Owners magazine.
Melissa hosts an annual Aspiring Authors contest for children and has painted and donated several murals to The Hospital for Sick Children in Washington, DC. Melissa lives in Maryland with her family.
Visit Melissa on social media. Melissa enjoys discussing her books with book clubs and reader groups, and welcomes an invitation to your event.
Authors Links:
Website
Twitter
Facebook
Pinterest
Goodreads
Sign up for Melissa's newsletter to stay up to date with releases and giveaways
http://www.melissafoster.com/newsletter/ 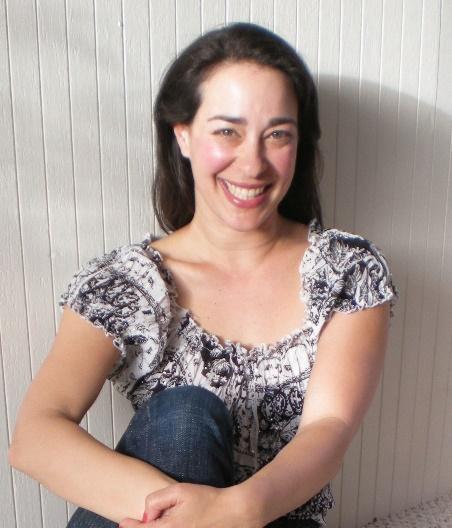 Bella Andre is the New York Times, USA Today and Publishers Weekly bestselling author of “The Sullivans” and “The Morrisons” series.
Having sold more than 4 million books, Bella Andre’s novels have been #1 bestsellers around the world and have appeared on the New York Times and USA Today bestseller lists 23 times. She has been the #1 Ranked Author at Amazon (on a top 10 list that included Nora Roberts, JK Rowling, James Patterson and Steven King), and Publishers Weekly named Oak Press (the publishing company she created to publish her own books) the Fastest-Growing Independent Publisher in the US. After signing a ground-breaking 7-figure print-only deal with Harlequin MIRA, Bella’s “The Sullivans” series is being released in paperback in the US, Canada, and Australia.
Known for “sensual, empowered stories enveloped in heady romance” (Publishers Weekly), her books have been Cosmopolitan Magazine “Red Hot Reads” twice and have been translated into ten languages. Winner of the Award of Excellence, The Washington Post called her “One of the top writers in America” and she has been featured by Entertainment Weekly, NPR, USA Today, Forbes, The Wall Street Journal, and  TIME Magazine. A graduate of Stanford University, she has given keynote speeches at publishing conferences from Copenhagen to Berlin to San Francisco, including a standing-room-only keynote at Book Expo America in New York City.
Bella also writes the New York Times bestselling Four Weddings and a Fiasco series as Lucy Kevin. Her “sweet” contemporary romances also include the new Walker Island series written as Lucy Kevin.
If not behind her computer, you can find her reading her favorite authors, hiking, swimming or laughing. Married with two children, Bella splits her time between the Northern California wine country and a 100 year old log cabin in the Adirondacks.

ANOTHER REBECCA
BY TRACEY SCOTT-TOWNSEND 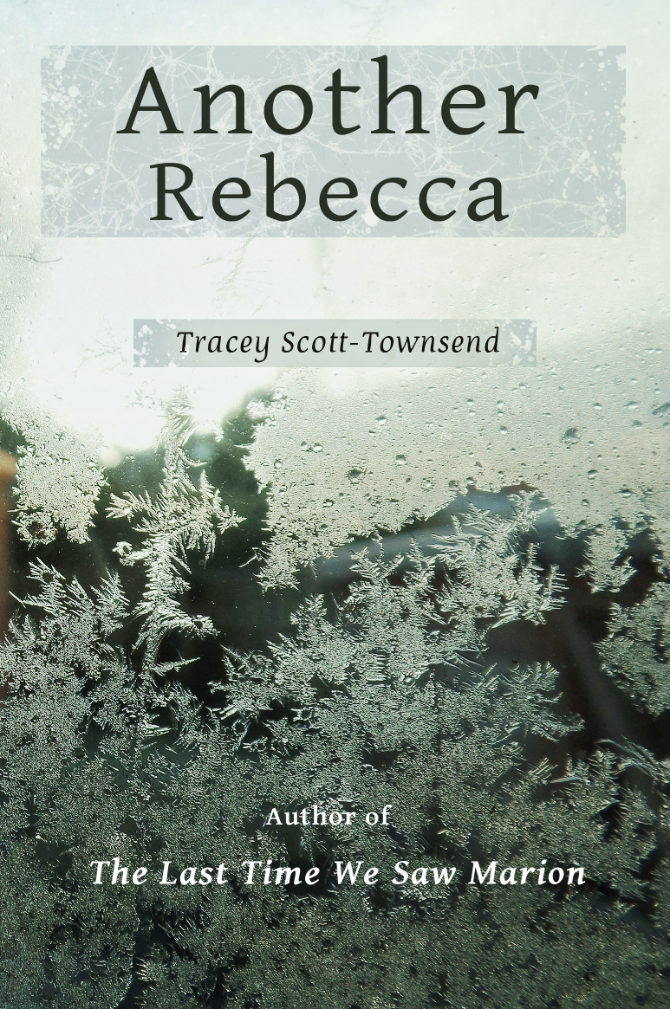 On the cusp of adulthood, Rebecca Grey has no idea where her life is headed. Like many of us, she struggles to build a sustainable identity, a task made even harder by the fact that her mother is engaged in an extended breakdown and her absent father has another family to worry about. Dealing with their problems leaves little time for her own, and pretty soon, something has to give. As she toils under the weight of a tragedy that was never hers to begin with, Rebecca faces the impossible task of carving out a future for herself, all the while shadowed by the mistakes of her parents. Told with an experienced voice through the eyes of three characters.
Another Rebecca tells the story of one family’s moving inability to let go of the past, of love lost and found, and a young woman’s determination to pull herself out of disaster.
BUY LINKS
AMAZON UK
AMAZON.COM
THE LAST TIME WE SAW MARION 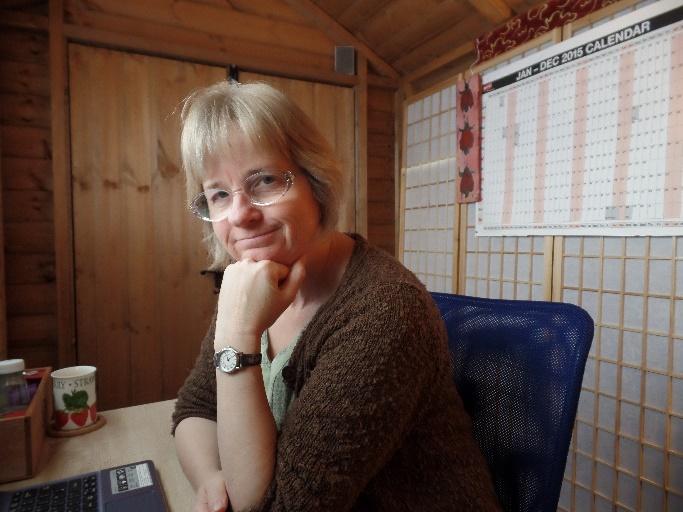 Tracey spends her writing time in her much-loved shed. It’s a world of her own making, like her stories. She says that stepping inside and closing the door behind her induces a feeling like the one you get in the hushed atmosphere of a church.
She is the mother of four children, three of whom have now left home: one of them particularly far away. Still, she’s sure that Australia will provide as much inspiration for her writing as Iceland has done, (another place she was introduced to by her son). She’s really hoping to witness a full show of the Northern Lights next time she is there.
Closer to home, Tracey enjoys travelling in the bus-with-a-woodstove with her husband and their Labrador, Riley. They are always on the lookout for a scenic layby in which to sleep. Last year they spent time all over the British Isles, including the Outer Hebrides, which will be the setting for a future novel. In a few years they plan to set off on the road (by way of the sea) for an extended period of time: after all, writing can be done anywhere.

Brides of War by June Tate

When Gracie Rider and Valerie Johnson leave their UK lives behind them to start new lives as GI brides in America after the end of the Second World War. They are full of hopes and dreams of what their lives will be. However all is not plain sailing, as they soon discover the reality of the dream to be not what they expected.

I really enjoyed reading this story, the brand new novel from author June Tate. It was the remarkable brave and strong leading ladies in the book that I really liked. Their determination, strength and independence to get what they want out of life, makes the story intriguing and the characters very likeable. I would really like to see what happens next for these wonderful women. I do hope there will be a sequel. 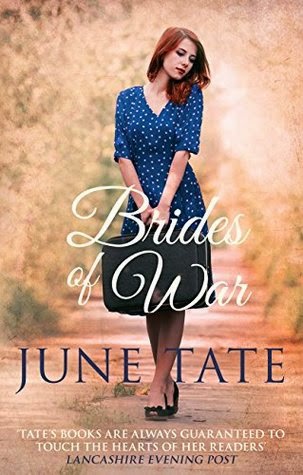