We can all remember where we were on the fateful morning of September 11th 2001. Even those of us who were not in New York witnessed the horror of what happened on the television. Artie was present in New York on that morning at work across from the World Trade Centre and he describes in detail what he witnessed, from the moment he hears a loud boom in his office, to the horror he witnesses on the streets outside. Artie tells us what it was like to be in New York City that day and in the weeks and months that followed.

It is hard to believe that we are fast approaching the tenth anniversary of September 11th. Artie’s account is an important part of history. We must not forget what happened and remember all those who lost their lives. This book gives us a greater understanding of what it was like to be there and have to have experienced what was happening. It is such a powerful account that will transport you back to the horrors of that day.  While I was reading this book, I had to keep pausing from reading to reflect, it really moved me, emotionally, because we all deeply care about the loss of lives and what people experienced that day. This book will stay with you a long time after you have read it. It really makes you think about how lives are still, affected by those who were there like Artie on that terrible day. 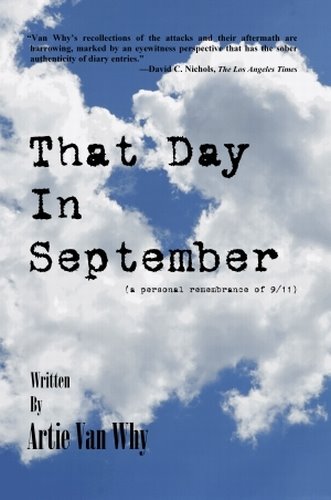 Email ThisBlogThis!Share to TwitterShare to FacebookShare to Pinterest
Labels: Artie Van Why