Sometimes it Happens by Pauline Barclay

Sometimes it Happens is set on location of the posh and luxurious millionaires resort of Villas Bonitas. The story is about a lovely character called Doreen Wilkinson who after a big lottery win is holidaying on the resort with her daughter Tricia. Doreen is a great character she is not from a privileged background and the win has changed her life. She is from the East end of London and all her dialogue is written out just how she would talk in a cockney type slang which brings her more to life and is quite funny at times.

This is a new start for Doreen, who in the past struggled for money and now she has it by the bucket load.  When she arrives at the Villas, she causes a stir because as some of the other guests might say she is from a different class from the people who would normally stay there. Some of the other guests are Jack and Sheila Hoskins. Sheila is a complete snob, who looks down her nose at Doreen and she could make things unpleasant for her during her stay. Jack her husband is not all that Sheila thinks him to be and is keeping secrets. Simon and his partner Chicky who work as barristers. Add to that the staff who take care of the running of the Villas and you have got a great mix of characters, each with their own secrets. When Pat Greenwood, Doreen’s ex shows up unexpectedly, is he all that he appears to be or is he just after Doreen’s money?

This is a fantastic funny read. The characters really come to life and the interaction they have with each other is well written and done with great humour. When we all go on holiday, you never know what kind of people you are going to meet and this is what the story is about, a group of people who have ended up staying at the same location. What is great about this story is, that it has a moral that no matter how much money people have that they can still be the worst mannered and have no respect for others and that it is important to respect everyone no matter what their background is. It is about the person that you are and how well you respect and treat other people.

Sometimes it Happens put me in the mood for a much needed holiday and when I go I hope I have packed a book that is as good as this one! A great holiday read or it will brighten up a rainy day stuck indoors.

For more information on books by Pauline Barclay visit her website http://bit.ly/9oABfC 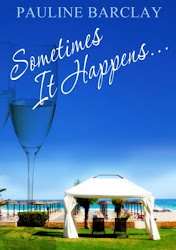