A Sprig of Broom by Margaret Blake

This is a historical romance novel set in the 1480’s at the end of the civil war between the House of Lancaster and the House of York. (The War of the Roses)

Lady Cecily Hadfield had dreamed of having a grand wedding, but this was not to be. She was to have an arranged marriage to a man called Thomas Cadwallader who she despises and she also thinks is a murderer who was involved in the battle which caused the death of Richard the Third.

Cecily is a head strong girl who is determined not to express her discontentment of her circumstances. She knows she has no choice but to go through with the wedding. But she is wilful that she will keep her own mind. Cecily will soon find out that fate as more in store for her than she could have ever imagined.

This is a really enjoyable read from Margaret Blake. A Sprig of Broom is Margaret’s eleventh novel. I liked this book because there was no way you could predict how the storyline would play out. It’s got some great plot twists and I did like the stories heroine Cecily. This book really keeps you entertained, if you like history and romance this book is the perfect read for you.

Margaret Blake was born in Manchester England. Margaret was inspired to write this novel after reading a book that had positive things to say about King Richard the Third. 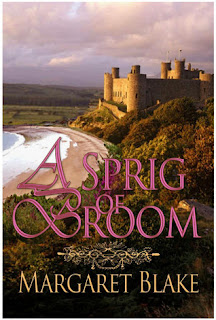